WHETHER YOU HIT OR NOT – DON’T RUN 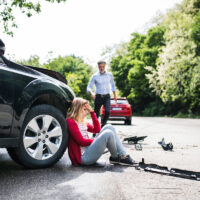 A hit and run describes a car accident in which the driver leaves the scene without stopping to identify him/herself or offering help to anyone else.

In most states, nolo.com explains, it doesn’t matter whether you caused the accident or not; the act is committed by leaving the scene, and there are criminal penalties for “running”. In the state of Indiana, a hit-and-run is a Class A misdemeanor, and a hit-and-run conviction can result in jail time and a fine from $1,000 to $10,000.
Regardless of the reason, leaving the scene of an accident is serious. Even if there are no injuries to anyone from the accident, hit-and-runs are misdemeanors. If there is serious or catastrophic injury, the punishment is even more severe, while an injury-causing hit-and-run committed while intoxicated can result in imprisonment for up to 30 years!

To avoid a hit-and-run charge, Indiana law requires that you do several things immediately after an accident, enjuris.com explain:

What if you’re not either the “hitter” or the ”runner”, but the victim of a hit-and-run? Options to explore include:

The option of reaching out to an Indiana personal injury attorney for help should not be left for last. At Ramey & Hailey we know that, the sooner we hear from you, the sooner we can begin the process of formally filing a claim and gathering information.

How can you tell if your case even warrants legal assistance? It certainly pays to find out. An insurance company (yours, or if the “hitter” is caught, theirs) is going to be offering you a settlement. But once you’ve accepted a settlement from an insurance company, you’ve given up your right to sue. Remember, as an injured party, you will have become the adversary of even your own insurance company, because that company will be trying to give you an award that is as low as they can reasonably get you to accept.

Whether you hit or were hit, never run from the scene of an accident.