YOUR INJURY ATTORNEYS IN THE NEWS: BROWN VS. IMPD CASE ABOUT MUCH MORE THAN PUNISHMENT OR MONEY 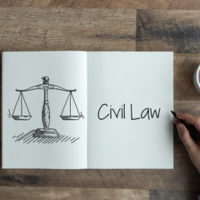 There are two kinds of cases that are heard in the trial courts, the Indiana Judicial Branch website explains: civil and criminal.

Civil cases involve conflicts between people or institutions. They might involve divorce, child custody, or business contracts. Civil cases might also be personal injury cases, where a person has been injured and seeks money damages from the person or institution at fault. After an auto accident, for instance, one driver might be suing another.  Neighbors might be involved in a dispute over who should pay to repair a common sidewalk or fence.

In the case of plaintiffs Kevin Brown and Beverly Dianne Brown, which Ramey and Hailey Law is representing vs. the Indianapolis Metropolitan Police Department, the City of Indianapolis, and Officer Emily Perkins, that personal injury lawsuit is about much more than money or even punishment – it’s about civil rights.

“I’m a law professor,” Brown told Law.com. “If I can’t bring light to this (referring to the trend of overly aggressive treatment of black citizens by white police officers), “I’m not doing my duty. I know there will be few people in Indianapolis with my credibility who have a run-in with the police. I can do something about it.”

Amendment IV states that it is the right of the people to be secure in their persons, houses, papers, and effects, against unreasonable searches and seizures, while Amendment XIV states that all people deserve equal protection of the laws.

“Officials and officers of the IMPD were well aware that there was disproportionate tendency for police officers to detain black citizens without justification,” the civil suit document explains.

Brown vs. IMPD is about much more than punishment or money – it’s about principles!