YOUR INJURY ATTORNEYS IN THE NEWS: SLIP AND FALL CHANGES TWO LIVES FOREVER 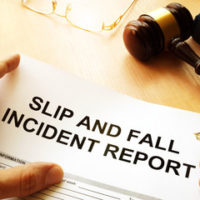 On their way to their son’s house for dinner, Loretta Kuhns had her husband drop her off at a local grocery store, where she wanted to pick up some pecans to bring along. Lotus Kuhns was in on a secret – they were not headed to their son’s house at all. Instead, relatives and friends had gathered in a nearby restaurant to celebrate the couple’s fiftieth wedding anniversary. Little did either of the Kuhns dream that a slip and fall accident inside that Meijer’s store would forever alter their lives for the worse…

Originally taken by ambulance to Elkhart General Hospital, Mrs. Kuhns was subsequently airlifted to Parkview Hospital in Ft. Wayne, where surgery was performed; later she was transported to Miller’s Merry Manor for physical and occupational therapy. Since the accident, Lotus has become the full-time caregiver for his wife, who moves about their home in a wheelchair, needing assistance with bathing and other daily activities. Outpatient treatment will continue for the remainder of Loretta’s life. Medical expenses since the accident have exceeded $300,000; estimated lifetime expenses are more than double that sum. Mr. Kuhns was forced to leave his job, foregoing the income he was bringing into the home.. Even more frightening is the fact that the three surgeries performed to restore her vascular blood circulation after the dislocation of her knee have put Mrs. Kuhns at high risk for any general anesthesia that might be necessary in the future.

Along with attorney L. Jay Miller of Goshen, Indiana, Rich Haley of Ramey & Hailey Law is representing the Kuhnses in their premises liability lawsuit against Meijer Stores and the Meijer Group, Inc.

The cause of this long and ongoing saga of misery – a piece of wet cabbage that had not been cleaned off the floor! The formal complaint document reads: “Under Indiana law, Meijer was under an obligation to implement reasonable measures to insure the safety of their customers while on its premises.”