FIGHTING THE GOOD FIGHT FOR THE ENVIRONMENTALLY INJURED 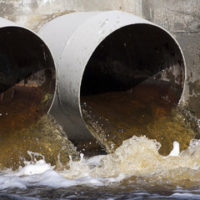 A terrifying new discovery has been made in Johnson County, Indiana.  The very systems approved by state regulators to treat contaminated sites appear to be pumping toxic chemicals straight into the air. Environmental engineers from Mundell & Associates believe the very pumping systems installed to treat metal sludge and solvents contaminating the groundwater are producing noxious vapors.

Back in December, we reported in this, our Ramey & Haley blog, that the Environmental Working Group had learned that harmful contaminants, some linked to cancer, brain, and nervous system damage and development defects, have been detected in Indianapolis’ drinking water.

Now, we learn, some homes in Franklin, Indiana have been contaminated with more than ten times the state’s recommended contamination levels. The homes now being tested are within a five mile radius of the former Amphenol plant.  Initial findings show high levels of three substances, all of which, according to the Centers for Disease Control and Prevention, are known to be cancer-causing to humans:

In fact, rates of cancer for Johnson County children have been rising, statistics from the National Cancer Institute show.

“There oughta be a law” when adults, and even little children, are being poisoned by toxins in the water and in the air, and – there is.  If you or someone close to you has been diagnosed with a condition caused by exposure to toxic substance, knowing your legal rights can be crucial in getting financial help for injuries, damages, loss of wages, and medical expenses.

When it comes to environmental damages, filing a lawsuit is very different from, say, a traffic accident lawsuit or even a malpractice lawsuit.  Hundreds of thousands of people may have been affected by the same contaminants. People often join together to file a class action lawsuit. As Indiana personal injury attorneys, we at Ramey & Hailey might begin by representing just one person who brings a situation to our attention.  Later, other victims might be given the chance to join the lawsuit.

Any activity which creates a substantial interference with your right to use and enjoy your property can be dealt with through legal channels. The same is true when you or your children have suffered damage to health. Think about the people in Franklin, Indiana:…According to an article in USA Today, “back in 2015, a group of community members from Franklin pushed the Indiana health department to investigate for a cancer cluster, which is defined as a greater-than-expected incidence of a particular cancer within a population group and demographic area.” Spokespeople from IDEM (Indiana Department of Environment Management) and the State Department of Health told the IndyStar reporter that they had not had time to assess the test results and therefore could not comment….

The tests, by the way, focused on exposure in the air, but the same chemicals can also exist in the soil and water… Meanwhile, the health department admitted that the county had had no fewer than 111 cases of cancer in people younger than 20 between 1999 and 2013!

Now, with children heading back to school after summer break, Franklin Community Schools announced that it is working with an environmental consulting firm to determine if two of the district’s elementary schools, attended by 700 students between pre-kindergarten and fourth grade) need to be tested for dangerous chemicals.

Remember the movie “Erin Brockovich” starring Julia Roberts?  Erin stumbles upon some medical records placed in real estate files. She convinces Ed to allow her to investigate, where she discovers a cover-up involving contaminated water in a local community which is causing devastating illnesses among its residents. In real life, Erin-Brockovich-Wllis’ research resulted in a $333 million settlement with the Pacific Gas $ Electric Co…

Here’s what the real Erin Brockovich has to say:

“There are so many buried secrets about our system that are destroying the two things we all need to have in common – our environment and our health.  If I can channel people to a law firm that can take on litigation to cease injustice, fight the good fight, and correct a wrong, I will.”

At Ramey & Hailey Law, fighting the good fight and correcting wrongs is what we have been doing for forty years!