FOR BIRTH INJURIES, DEADLINES MEASURED IN YEARS, DAMAGE IN LIFETIMES 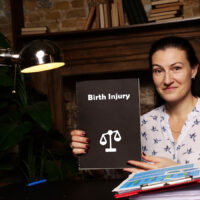 In the state of Indiana, parents have until their child’s eighth birthday to file a malpractice lawsuit against a medical practitioner, claiming their child suffered a birth injury that would have, with proper care, been avoided. Startlingly, the Department of Health and Human Services reveals that almost one-third of childbirths in the United States involve preventable birth injuries.
There are different kinds of semi-permanent to permanent birth injuries that can result from medical practitioners’ negligence:

Birth asphyxia or encephalopathy happens when the infant’s brain doesn’t get enough oxygen during and after birth.  This injury can leave a child in a vegetative state and even cause death. Failure to properly monitor the child before, during, and after birth and quickly deliver oxygen as needed constitutes medical malpractice.

A network of nerves located in the spine leading to the arms, wrists, and shoulders becomes stretched, compressed, or torn during birth, with the result that the arm and shoulder remain improperly formed or positioned, with loss of grip strength and even paralysis. This can occur when a doctor uses excessive force during delivery or uses the wrong tools. The most common type of brachial plexus injury is Erb’s Palsy, in which a child’s arm may remain paralyzed.

With cerebral palsy, a child’s neuromuscular system is damaged, and movement, muscle tone, balance, and posture, are impaired.  There may even be speech and vision problems. This can result from three kinds of failure on the part of doctors and nurses:

During the delivery process, it’s important to avoid putting pressure on the infant’s face, While often this type of paralysis is only temporary, it can be permanent.  Practitioners must be alert and reduce the time an infant is subjected to facial pressure.

Certain conditions tend to increase the chances for a birth injury to occur, including:

Not all birth injuries are the direct result of medical malpractice, to be sure. Still, medical providers have been entrusted with the responsibility to anticipate, and to the extent possible, prepare for and deal with these very conditions.

Compared with other injury-related legal claims, medical malpractice suits are complex, and birth injury cases are often the most complex of all. As personal injury attorneys in Indiana, we are experienced in determining the appropriate course of action to take regarding birth injuries, first filing a complaint with a medical review panel.

While filing a medical malpractice lawsuit may be done at any time up to birth-injured children’s eighth birthday, the damage to their lives – and to the lives of their caretakers can persist for decades. In addition to the fact that at least one parent often stays home with the child, suffering a loss of income, costs may include:

For families with a birth-injured child, the deadline may be eight years, but the need for help due to damages – can last a lifetime.