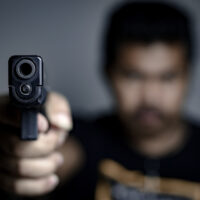 Grim statistics, these, and, at Ramey & Hailey, one major goal of ours is to reach the people behind those headlines, innocent folks whose lives have been thrown off track because they or someone they love has been victim of a gun accident. We are attorneys, devoted to the law, and when lawlessness grows in our city we are outraged.

We recognize that, behind each of those headlines are people whom the law failed to protect from harm.  Behind those headlines about shooting are dependent family members of those killed and maimed; the injured themselves will need extensive medical and psychological treatment for many years to come.

The irony of it all is that, while the law can often pursue and then punish the perpetrators of gun violence, the physical, mental – and financial – “punishment” of the surviving victims and of families left behind continues. And the reality is, the only financial recourse available is through our civil court system.

A wrongful death claim is a special kind of personal injury lawsuit made when someone is killed due to another party’s negligence or intentional act. The law allows a representative to file a lawsuit on behalf of surviving family members. Sadly, the damage cannot be undone, but the purpose is to help support surviving dependents and to serve as a warning to others to stop committing crime.

As we all know, shooting deaths and injuries are not always the result of crime. What if you or someone close to you was unintentionally killed or wounded by a firearm?  Again, it’s the civil court system that can provide financial recourse.

If the harm was caused by the gun itself (because it was defective), you may be able to recover from the gun manufacturer, the gun seller, the distributor, or the gun owner. If the injury was caused by a person’s negligence in storing or handling the gun, you might recover a settlement under gun liability laws.

In intentional shootings, there might be liability attributed to the gun seller or even to the parents of a minor who committed gun violence (for failing to supervise their child and failing to keep guns and ammunition out of the hands of their child).

100 Americans are killed with guns every single day, the Giffords Law Center tells us, and nearly every American will know at least one victim of gun violence in their lifetime, including both intentional and accidental shootings. As personal injury attorneys in Indiana, our dedication is to help gun violence survivors pick up the financial pieces.