IN THE NEWS: CEMENT PLANT TO PAY $700K FOR SPEWING POLLUTANTS 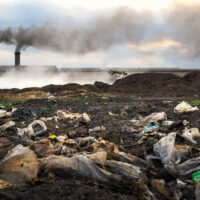 A Greencastle, Indiana cement plant has not only been ordered to upgrade its facility but is being fined more than $700,000 after nearly ten years of Clean Air Act violations, Northwest Indiana.com reports. In the process of producing its primary product, Portland cement (a substance used in the construction industry to manufacture concrete), that plant released into the air-liquid droplets and solids containing unsafe levels of pollutants. These substances often enter people’s lungs, causing them serious health problems.

After a lengthy investigation, Lone Star Industries reached a settlement with:

The settlement involves more than the imposition of that large fine; owners of the company are required to upgrade the plant’s pollution control equipment and procedures, at a cost of some $1.4 million. The upgrade is estimated to achieve the reduction of particulate matter emissions by 2.44 tons per year, as well as cutting carbon monoxide emissions by 46 tons per year.

“Sick air” and “sick water” invariably result in sick people, as we well know at Ramey & Hailey Law. Harmful contaminates are hazardous to the health of people exposed to them over long periods of time. Two years ago we reported in this blog that contaminants, some linked to cancer, brain, and nervous system damage and development defects, had been detected in Indianapolis’ drinking water.

Certainly, negative publicity and fines are things that help move company executives to take measures to reduce environmental pollution. But if you or someone close to you has been diagnosed with a condition caused by exposure to toxic substances, knowing your legal rights – and taking action – can be crucial in getting financial help for injuries, damages, loss of wages, and medical expenses.

Any activity which creates a substantial interference with your rights can be dealt with through legal channels. The same is true when you or your children have suffered damage to health due to the failure of companies to follow the regulations meant to protect citizens’ health.

The authorities, after thoroughly investigating pollution violations, may impose fines and dictate upgrades. But when your own health and that of your loved ones has been compromised, our mission at Ramey & Hailey is to help you fight back.