IN THE NEWS: MEDICAL MALPRACTICE LIMITS CHALLENGED IN CALIFORNIA 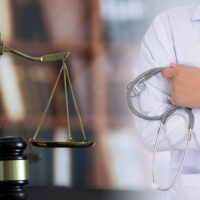 $250,000 cap on pain and suffering damages in medical malpractice cases highlights the importance of medical malpractice laws everywhere in the U.S.  Mosley is claiming that putting a cap on the damages an injured party can claim is unconstitutional. Why? The cap “hampers an individual’s right to legal redress”.

With more than 40 years’ experience helping both victims of medical malpractice and healthcare professionals unfairly accused of malpractice, at Ramey & Hailey Law we understand the issues the Mosley case is highlighting.

First, what is medical malpractice? Medical professionals have a duty to provide adequate care for their patients. Malpractice may have occurred if:

In the state of Indiana, physicians are responsible for only the first $400,000 in damages to any one patient.  If the patient is awarded more than that, the excess – (current upper limit is $1.8 million dollars) comes from the state’s Patient Compensation Fund.

It’s interesting to note that Indiana was the very first state to pass medical malpractice reform legislation. It is because of our Indiana Patient Compensation Fund that injured patents have hope of recovering large sums. ”Sugar” Shane Mosley speaks of an individual’s right to legal regress, but the money needs to come from somewhere, and in many states, the healthcare provider may not have adequate insurance or assets to pay large sums in compensation.

A second aspect of “legal regress” has to do with timing.  In Indiana, you must file a malpractice claim within two years of the time you believe the malpractice took place. (Often, a patient might not discover the damage until months or even years after a mistake happened.) As personal injury attorneys, our expertise in determining the applicable period for the statue of limitations as it applies to your case is a critically important part of the service we provide..

Yet another aspect of Indiana medical malpractice law bears mentioning: Patients do not go directly to court to sue for medical malpractice. First, a proposed complaint must be filed with the Indiana Department of Insurance. Your case will be evaluated by a medical review panel consisting of three physicians.

Indiana, it appears, is far ahead of many other states in helping injured patients obtain “legal redress”!