IN THE NEWS: SHAQUILLE KELLY SHOT BY POLICE IN FT. WAYNE 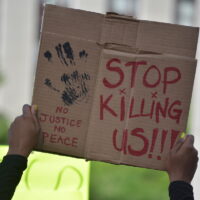 The personal injury law firm of Ramey & Hailey is representing Melina Dominguez, mother of Shaquille Kelly’s four children, in a lawsuit against the Ft. Wayne, Indiana Police Department and Officer Christopher Hawthorne. On May 22, 2019, Kelly was shot and killed by police.

As the Allen County prosecutor’s office announced that no charges would be filed against the police officer, “the family said they don’t believe the official story and want more answers,” Jamie Duffy reported in the Journal Gazette. According to the prosecutor, police attempted to stop Kelly’s car after responding to a report of shots fired. Kelly refused to stop, eventually crashing into a house. Kelly then exited his vehicle with a handgun in his hand, at which point the officer fired, killing him. Kelly’s relatives believe, instead, that he was pulled out of his car by police before being shot.

The formal complaint filed by plaintiff Melina Dominguez (as executor of Kelly’s estate), asked the court to consider several points:

The “task” of a police force, simply put, is to protect citizens against brutality. When the opposite happens and citizens become the victims of brutality by police officers, it is important to know that there is legal recourse. That means that when governmental employees, including police officers, inflict wrong, the municipal government who employed those officers can be sued in civil court.

At Ramey & Hailey, one major goal of ours is to reach out to dependent family members of those killed and maimed by unjustified violence by police. And the reality is, the only financial recourse available to both the victims of brutality and their dependents (remember that Kelly was the father of four children) – is through our civil court system.