IN THE NEWS: VEHICULAR HOMICIDE RESULT OF IMPAIRMENT AND SPEED 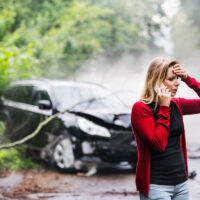 After the driver of a four-door sedan lost control of his vehicle, the car hit a telephone pole, then careened onto a sidewalk, hitting a pregnant 20-year old woman before hitting a building. While the driver and his passenger suffered non-life threatening injuries; both the woman and her newborn infant died.

For our Ramey & Hailey blog readers, this story illustrates several important points about auto accident personal injury. Of the five million car crashes that happen in the U.S. each year, many of those hurt or killed are occupants of vehicles or even pedestrians. When a wrongful death lawsuit is filed, it is family members or an estate executor who are suing for damages from the person whose negligence caused the accident.

Once the driver is released from the hospital, under the law, he will face “vehicular homicide” charges. This is a class of homicide that applies exclusively to motorists who cause the death of another person while operating a vehicle. The MSN article mentioned that the driver was “impaired”, meaning he was under the influence of alcohol and/or possible drugs.

Pedestrians deserve to feel safe on public streets, and drivers have a duty to drive with caution and look out for pedestrians, yet the CDC estimates that a pedestrian is struck and killed by a motor vehicle every 88 minutes in the U.S.!

Think about the tragedy here – the lives of a 20 year old mother-to-be and a yet-to-be-born child were snuffed out. There is no way to make things “right”. But, because laws have been put in place to protect victims of motor vehicle collisions, at Ramey & Hailey we are at least able to help surviving family members recover for their losses.