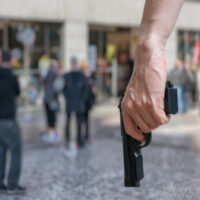 It’s been eight years since the school shootings took place at Sandy Hook, but the lawsuit brought by the victims’ families against rifle manufacturer Remington has been moving back and forth through state and federal courts, finally reaching the highest court in the land.

In 2014, the families filed suit, claiming that the Remington Bushmaster AR-15 rifle should never have been sold to the public. As a military weapon, they said, the gun had been marketed and promoted by Remington for use in assaults against civilians (advertising copy spoke of “military-proven performance”) The Remington company, meanwhile, claimed that under the law, dealers and gun makers are immune from prosecution over crimes committed with their guns.

It was, in fact, the Remington Company that appealed to the U.S. Supreme Court, asking the court to overturn the lawsuit by the Sandy Hook families, but the Court has denied the company’s right to blog the lawsuit.

The Supreme Court decision marks a blog to the gun industry, CNN Business observes. “Depending on the outcome of the case, it could open the door to gun violence victims’ families suing gun manufacturer for damages.”

Having served as a personal injury lawyer for so many years, I realize that in the United States of America there are plenty of guns, with plenty of laws, both federal and state, governing gun manufacture, gun sale, and gun use. Despite all those laws, there is plenty of gun violence.

Think about it – all the victims at Sandy Hook – and all the victims of every other school shooting – left behind people who cared about them and who depended on them for financial and emotional support. Our mission at Ramey & Hailey is to use our experience and legal know-how to help victims and their survivors “recover” at least the financial security that has been so cruelly and so suddenly taken away.