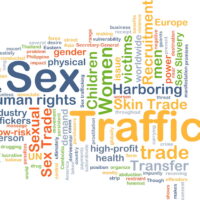 “In 2003, Congress created a private right of action to allow trafficking victims to bring civil cases against perpetrators,” the Human Trafficking Legal Center explains. But ”even when prosecutors succeed in obtaining convictions, courts rarely order criminal restitution (compensation) to trafficking victims…”Federal prosecutors can indict for these crimes…and survivors can sue those who perpetrate them.” The problem – incarcerated perpetrators of sex trafficking rarely have resources that can help pay for victims’ medical costs and psychological rehabilitation.

“Several major hotel chains were hit with lawsuits alleging that workers at their Georgia and Louisiana locations assisted sex-traffickers in evading police over the course of six years, court records show,” Fox News reported. “Rampant sex trafficking was overlooked by Atlanta- and Baton Rouge-based hotel employees who were paid by traffickers to turn a blind eye and act as lookouts for the Johns…”.

Is sex trafficking happening in Indiana?

In January, 2018, the Indianapolis Star reported that in 2016, nine children from high end suburban communities in Hamilton County were purchased by adult buyers for sex, often in hotels in the Castleton area, with the youngest victim only 11 years old. ‘These are students at Carmel High, Fishers and Hamilton Southeastern,’ said Addie Wood, an attorney with the Hamilton County Guardian Ad Litem program.”

One of the many myths about human trafficking, our Indiana Attorney General explains, is that it does not occur in the United States and does not affect U.S. citizens. In reality, he explains, this exploitive violent, criminal industry places an estimated minimum of 300,000 American youths at risk of becoming victims of commercial sexual exploitation.

At Ramey and Hailey Law, we are joining forces with law professionals in other states to come at the problem of human trafficking in a unique way – targeting business entities that profit financially from human trafficking, hitting those businesses where it hurts – their pocketbooks.

Here in Indiana (where we are part of the U.S. Department of Health and Human Services Region V), top venues for sex trafficking include residences, hotels/motels, escort services, and illicit massage/spa businesses.

As personal injury attorneys in Indiana, we have been helping hundreds of victims of sexual abuse find their way to a new start. We are gratified that a recently passed bill removes immunity for illegal content posted on the Internet. The law now creates civil liability for social media companies that benefit from human trafficking.

Remember – the law goes after sex traffickers; through civil lawsuits, we help go after the enablers!